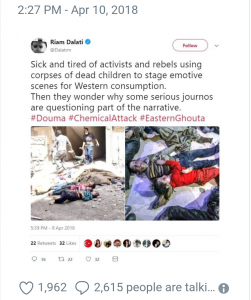 This is a screenshot of a later deleted tweet from 3 days ago by a BBC reporter. Seems he realised he’d stepped way outside the BBC-Western narrative which an impending war is based on and thought wiser of leaving his bollocks on the chopping block. Helpful to clarify that false-flags committed by defeated Western-backed proxy terrorists involving killing kidnapped children to try to provoke an air war have long been a common feature of this conflict. Would you seriously want the UK govt to join another US war based on this!?!