A timeline of events in Ukraine that have brought us to the current confrontation. 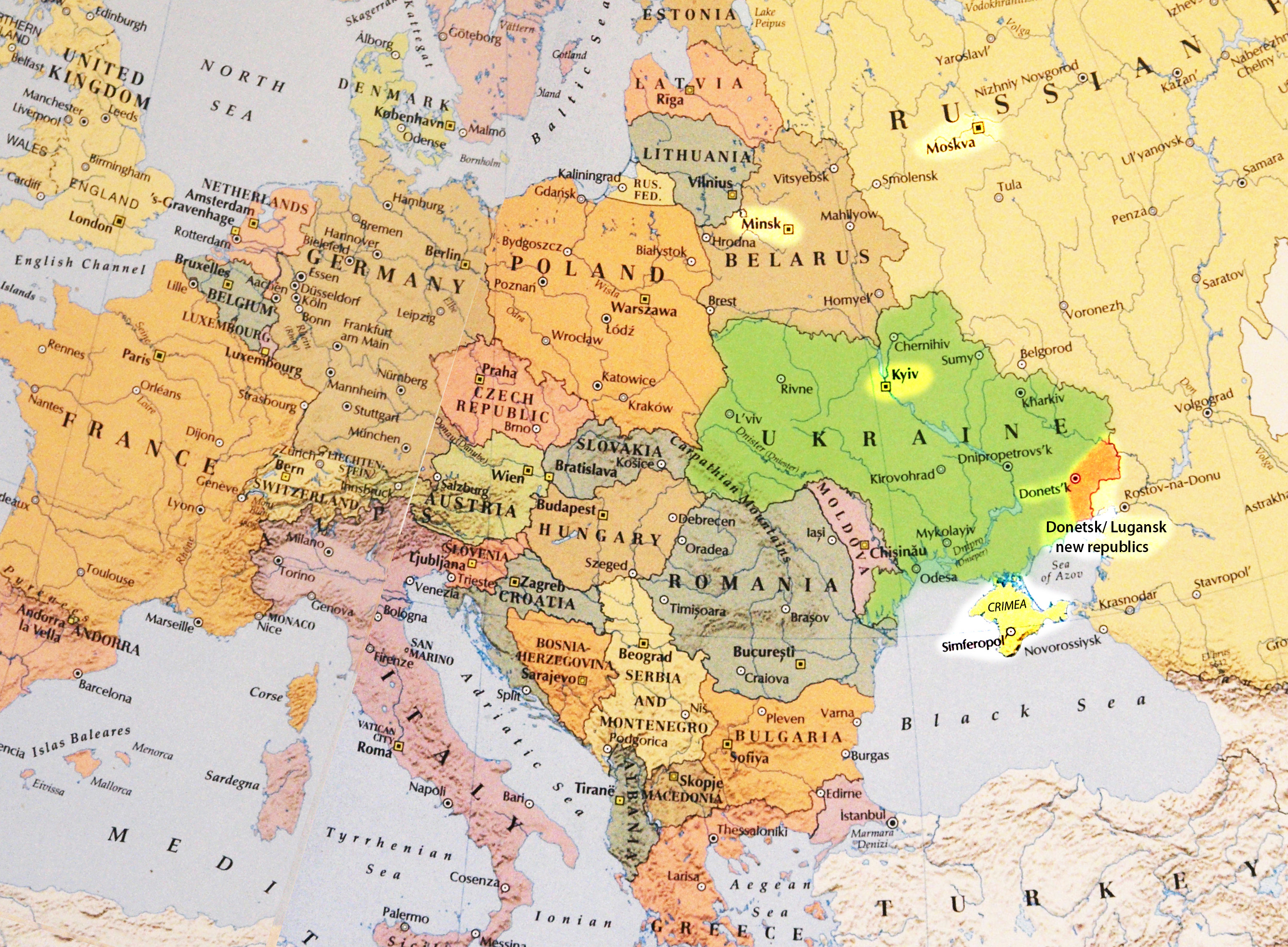 November 2013: President Yanukovich refuses to sign the ‘EU association agreement’ (#1) which would drive a wedge between Ukraine and Russia and be an economic and strategic threat to Russia. This refusal starts the ‘Maidan occupation protests’, which are supported by the US and European governments and media.

February 2014:  Under pressure from the pro-European protestors, Yanukovich makes concessions, but these do not placate violent far-right elements who insist he must go. Snipers, later identified as belonging to this faction, fire on both police and protestors (#2). This provokes a violent response from police and security forces which in turn is seen to justify the storming of government buildings and an ultimatum. Yanukovich is soon forced to flee. A new emergency government previously selected by US neo-cons ignoring wishes of European leaders is installed in Kiev (#3), and rapidly moves to exert its influence over the ethnic Russian populations of East Ukraine and Crimea.

March 2014:  Crimea organises a referendum and overwhelmingly opts to secede to Russia following discriminatory policies declared and aggressive threats from Kiev. Crimeans rightly regard the Kiev ‘government’ as illegitimate, and are threatened by its neo-Nazi and far-right sector members.  The referendum is overseen by Russian monitors and soldiers who are already in Crimea as part of a long running agreement on the base in Sevastopol, and the referendum passes without violence (#4). This is intolerable both to the Kiev regime and to its Western allies who accuse Russia of ‘annexing’ Crimea. This in turn leads to sanctions being imposed on Russia by the US and Europe.

April 2014: During this period following Crimea’s secession, Kiev works to replace leaders of local governments in Eastern cities Luhansk, Slaviansk and Donetsk, forcing residents to barricade buildings and then fight with Kiev’s thugs. Kiev refuses to acknowledge their legitimacy and refers to them as ‘terrorists’, with former PM Yulia Tymoshenko calling for the extermination of these ethnic Russian populations (#5). In one such fight against the growing resistance, Right Sector thugs set fire to a union headquarters in Odessa and prevent people escaping; at least 40 people are burnt alive (#6). The apparent intention of the ‘Odessa massacre’ is to terrorise residents who dare to resist Kiev’s power.

May 2014:  A Presidential election, which doesn’t include the dissenting East Ukraine provinces, elects Oligarch Petro Poroshenko. Despite the weak vote and dubious candidate, Moscow accepts his election and seeks to work with him to come to agreements on disputed areas. Ukraine’s debt and argument over Gas supply and transit to Europe is one of these, involving problems over new pipelines as well as US plans for its energy corporations to exploit Ukraine’s huge shale gas reserves, competing directly against Russia’s gas supply to Europe.

June to July 2014: The Ukrainian army, along with numerous neo-Nazi militias, pushes its campaign eastwards, but meets significant resistance from local defence forces. These are mostly untrained as soldiers but their commitment makes up for their poorer equipment. The Ukrainian army is poorly trained and badly commanded and chooses soft targets in residential areas (#7). The neo-Nazi battalions have both ‘enthusiasm’ and ruthless brutality against the ethnic Russian population they see as ‘Untermenschen’ (sub-human). Local leaders of the resistance in Donbass plead for Russian assistance, but it comes only through unofficial channels. No credible reports of either Russian troops or military vehicles within Ukraine is provided by Ukraine or NATO, but their claims of Russian ‘interference’ continue. During this period many residents of the Donbass flee from Kiev’s forces to Russia. The city of Slaviansk succumbs to Kiev, leaving Donetsk and Lugansk under siege.

July 17th 2014: Malaysian flight MH17 is shot down over the conflict zone killing all 298 people on board. Despite a lack of convincing evidence for such a strike, Western governments immediately claim that a ‘BUK’ missile fired by the ‘separatists’ caused the crash, and hold Russia directly responsible for enabling it. When Russian military intelligence releases radar and other reports several days later, showing evidence MH17 was brought down by a Ukrainian SU25 fighter plane, it is dismissed by Western governments and ignored by Western media. A request for the US to release its satellite records and other intelligence from the area is, and continues to be ignored. Forensic analysis of wreckage and victims which could easily establish what brought down the plane is either not done or not made public. We may draw our own conclusions on this (#8).

July-August 2014: The Ukrainian military campaign against ‘the rebels’ intensifies immediately following the MH17 disaster, making access to the site difficult. The attack on Donetsk is held back to the airport by the ‘separatist’ forces (#9). Intensified sanctions are imposed on Russia, but Russia takes ‘retaliatory’ action by stopping the importation of many products from Europe. While this is difficult for Russians it is disastrous for some European countries, notably Poland and France, and causes some domestic strife. At the same time the ongoing argument over Russian gas supplies to Ukraine and Europe intensifies because of Ukraine’s continuing failure to pay its bills while demanding more gas at discount rates. To ensure its own supplies of gas, which come through Ukraine, the EU finally agrees to pay Kiev’s bills, and Gazprom then ensures supply to Ukraine through the coming winter.

September 2014: Ministers from Russia, France, Germany and Ukraine meet in Minsk in Belarus (which shares borders with Russia, Ukraine and Poland) and agree on the terms of a ceasefire. Kiev refuses direct negotiation with leaders of the ‘resistance’ in Donbass, but their position is represented by Russia. The ceasefire is seen by Kiev as an opportunity to reinforce men and supplies, and soon the attacks on Donetsk continue. Boosted by armaments captured from retreating Ukrainian troops and by Russian volunteers, the ‘separatists’ hold their territory, and many refugees return.

October 26th 2014: Parliamentary elections are held in Kiev, without the participation of East Ukraine, and with a poor turnout in many areas. The elections are pronounced free and fair.  More normal life resumes in Donetsk and Luhansk, and the ‘new Republics’ hold their own elections on 2 November. The republics are called illegitimate by Western powers and Kiev, and not officially recognised by Moscow which tries to take a non-partisan position. While Russia is duty bound to give assistance to its neighbour and delivers many convoys of humanitarian aid, it is reluctant to take responsibility for this now devastated region of a bankrupt state.

November 2014: Against a background of plummeting Oil prices contrived by the US and Saudi Arabia as yet another weapon against Russia (#10) (but also Iran and Venezuela) Vladimir Putin remains steadfast; talks at the G20 meeting in Australia focus on Ukraine while the Australian press and leaders portray Putin as a liar and dictator, replacing orderly discussion with boxing ring threats. At a four hour late night meeting, German leader Angela Merkel fails to persuade Putin to abandon ‘Novorussia’ (the Eastern republics) and becomes firmly aligned with NATO objectives. Till this point Germany has been ambiguous about sanctions against Russia because of strong business ties and mutual cooperation.

January 2015: Following weeks of threats to continue his ‘anti-terrorist’ operation against Donbass, President Poroshenko launches a major assault on the Donetsk and Luhansk republics. While the Donetsk defence has significant successes, capturing battalions and their commanders, the Ukrainian army moves men and armour into an area between the two cities, from where it launches attacks on both and breaks their connection at the rail hub of Debaltsevo. This becomes a trap when the ‘separatists’ cut through the main route in from government held territory, leaving from 6-8000 men without access to relief supplies. The prospect of losing up to a third of its army in ‘the Debaltsevo cauldron’, or seeing them surrender to Donetsk, forces Ukraine and the West to the negotiating table. While Poroshenko is in complete denial, or in ignorance of this disastrous situation (along with Western leaders and Western media), Angela Merkel is forced to make an urgent visit to Moscow to talk to Vladimir Putin. French President Hollande accompanies her (#11).

Demonstrating the reality of the situation – the defeat of Kiev’s ambition to violently assert control over Donbass – talks held in Minsk draw up a ceasefire plan and political settlement recognising the rights of the new ‘republics’. President Poroshenko repeatedly walks out of the talks, but has no choice other than agreeing to the plans. He is however not a man of his word; not only does he claim that the leaders of the republics are illegitimate, but the neo-Nazi militias say that the ceasefire does not apply to them.  He also makes new plans for military expansion, visiting an arms fair in Abu Dhabi and coordinating with the Pentagon to bring new weapons into Ukraine.

While it may appear that the second Minsk ceasefire ‘is holding’, and is portrayed that way in our press, this can be no cause for relaxation; US and NATO plans remain the same, and the belligerent rhetoric continues against Russia. We cannot consider that Ukraine’s ‘Cuban missile crisis’ moment has passed and wait for new and unexpected developments with apprehension. The apparent assassination of a key ‘opposition’ figure in Moscow is such an event… (#12)

Dutch journalist Karel van Wolferen on US involvement and European supplication over Ukraine; a long and rational analysis:

Robert Parry, investigative journalist who exposed the Iran-Contra affair, looks at the neo-Nazis in Ukraine and the dangers of nuclear confrontation: