At the end of six days in Damascus last week, and on the eve of Ramadan, I finally found time to re-visit a Palestinian-run art gallery and shop with my wife; we had been there eight years earlier, and before this terrible war that we could never have imagined was begun. 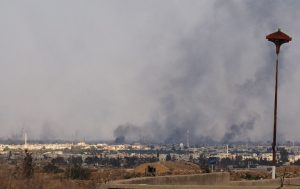 At that time, in 2010, the sins of the West against the Palestinians were our concern, and doubtless the topic of conversation with the women in the gallery, who sold fabrics and embroidery made by Palestinian women in their adopted homes – in Yarmouk and other areas where they were resettled by the Syrian government following the Nakba and subsequent expulsions. The brightly coloured cushion cover we bought then, appropriately depicting houses in a Palestinian village, has been a reminder of “unfinished business” ever since, but events last week in Gaza made this visit obligatory.

With perverse irony, while IDF soldiers were gunning down innocent and unarmed protestors trapped behind electrified fences in their Gaza prison, using exploding bullets to inflict maximum permanent injury to those they didn’t kill, the Syrian air force was bombing the terrorists of Da’esh in Yarmouk – once home to hundreds of thousands of Palestinian refugees. That very morning of May 16th, we had woken again to the sound of explosions and of Syria’s overworked fighter jets as they tried to force the last of Damascus’ Israel-friendly terrorist armies into submission and retreat.