In the light of history, the 14th of April 2018 will be seen as the day that everything changed. Without the missile strike on Syria, the previous actions of the criminals responsible may have gone unnoticed for longer and their activities gone unpunished.

But now their supreme confidence in their ability to conduct “provocations” with impunity will be their downfall, if there is any justice in the world, and those who can enforce it.

It was said at Nuremberg and is worth repeating, that:

“War is essentially an evil thing. Its consequences are not confined to the belligerent states alone, but affect the whole world. To initiate a war of aggression, therefore, is not only an international crime; it is the supreme international crime differing only from other war crimes in that it contains within itself the accumulated evil of the whole.”

By the peculiar circumstances of the joint US/UK/French missile attack on Syria, launched in violation of international law and without congressional or parliamentary consent, the question of all the other war crimes committed by these partners is made apparent. 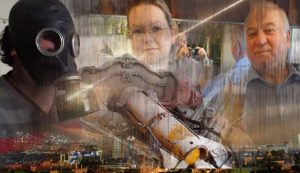