When Will The World Public Be Properly Informed of This Brutal Bloody Injustice?

35 Palestinians have been Shot Dead in Gaza since March 30th, including both Children and Clearly Labelled Journalists in ‘The Great March of Return’ protests, to mark 70 years since the ‘Nakba’ – when in 1948 Palestinians were ‘ethnically cleansed’ by being killed and violently forced to flee their homeland occupied by Israel.

At least 1,500 have been wounded, many with horrific life-changing injuries by bullets specially-designed to inflict maximum injury by splintering on impact, including a young footballer who was targeted and shot in both knees. Plus cases of gas canister projectiles fired wounding people in the head and at least one case of one being embedded in a poor young man’s face.

The NGO Amnesty International (AI) has joined calls for an arms embargo against Israel – see both reports linked below.

But unlike the major highlighting of AI’s reports in the mass-media when they demonise Western enemies, and win public support for armed intervention, the treatment is very different in the case of the West’s close ally Israel for whom shooting dead and maiming unarmed protesters with high-powered weapons is simply ‘no big deal’ in our Western self-described ‘free’ media. 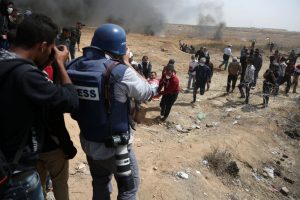 From Electronic Intifada site: Dozens of Palestinian journalists have been injured while covering the Great March of Return protests in Gaza. (Mohammed Zaanoun ActiveStills)