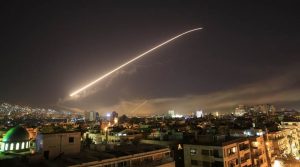 Damascus sky lights up with service to air missile fire as the U.S. launches an attack on Syria targeting different parts of the Syrian capital Damascus, Syria, early Saturday, April 14, 2018. Syria’s capital has been rocked by loud explosions that lit up the sky with heavy smoke as U.S. President Donald Trump announced airstrikes in retaliation for the country’s alleged use of chemical weapons. (AP Photo/Hassan Ammar)

My co-editor Alison and I were woken up around 4am yesterday morning by two very loud distant explosions and what turned out to be noise of Syrian air defences. Damascus had been very lively on Friday night, especially so as this was the first weekend in many moons that terrorists were unable to fire mortars into the city from the eastern Ghouta suburbs.