And how the ‘release’ of over 5000 women and children was negotiated and secured by a team led by Mother Agnes Mariam.

While Western media have been talking of the siege of Moadamiya – of a siege imposed on suffering civilians by the ruthless Syrian army – and of the urgent need for intervention to prevent starvation, Mother Agnes has been working steadily with ALL parties to the conflict to negotiate a way out of this deadly confrontation for the innocent civilian population trapped in the suburb of Damascus.

On Tuesday, 29th October, the final stage of the plan was achieved, and all those civilians wishing to leave were able to reach the safety of a government ‘guest house’ in Damascus, where they will stay until new plans can be made when the Syrian army ‘liberates’ Moadamiya from the remaining ‘rebel’ fighters.

The following document, sent by Mother Agnes today, explains what has been happening for the last couple of weeks, as well as showing how a remarkably committed and brave single person can change the course of an intractable conflict.

( the final part of this document is the most important…)

Mouadamieh , besieged for months, and who suffers daily violent clashes between the Syrian

The agency said that the Ministry of Social Affairs , in collaboration with the province of

temporary accommodation in the province of Damascus.

Mother Fadia Laham (in religion Agnès -Mariam of the Cross) , general coordinator of the

initiative, drew attention that the plan is carried out whereby the evacuation of children ,

communication with local stakeholders and coordination with the relevant authorities.

seek a peaceful solution to the Syrian crisis with Syrian actors.

Standing before the military barricade of the chemical plant in Moaddamiyya. It is closed by a

mound of earth since eight months.

The coordinating team will wait for an hour to no avail. The rebels refuse, by force of arms,

that civilians leave the city.

Despite the entreaties of her team, Agnès-Mariam is producing a white flag and adventure

beyond the entrance arch, in rebel territory, a no man’s land known for hiding 12 snipers 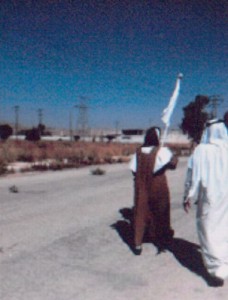 Members of the team are watching anxiously for her.

Her team follows her

Joined by Sister Carmel and two members of her team, Mother Agnès-Mariam is welcomed by

the men of the revolution that came without their weapons.

4 (photo MAM with some women and children)

Mother Agnes is wiping after seeing the condition of this woman that has been starving.

After a brief course through the destroyed and damaged town, the rebels take the team to the

headquarters of the Military Council: an apartment on the first floor of a building.

Arriving there every fighter will ask to listen personally to the explanations of the sisters.

Mistrust gives way to confidence, even to relax.

Jubhat Al Nosra recognizable to the Islamic banner on the front. A wounded shows his

Suddenly, turmoil and shooting in the air. The “independent revolutionnaries” arrive: they

have links with the government. They were opposed by the other factions. A battle occurred 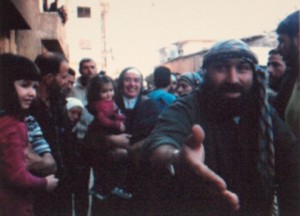 Finally a proeminent leader arrives. He asks his men to hide the warranted people and he

secure a safe exit to Mother Agnes-Mariam and to Sister Carmel. 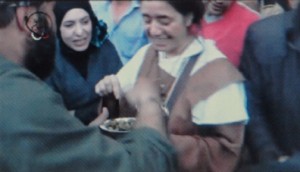 In the destroyed streets of Moadamiyyah there is a “feast”, a friendly encounter…

The trust has been built. It will allow the evacuation of 5000 civilians before sabotages

occurred and prevent the continuation of this initiative

The impressive humanitarian armada waiting for the evacuation of the civilians

A unique photo: rebels and pro-government militiamen are together like…brothers ! 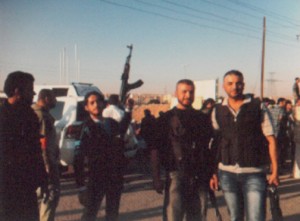 Finally the arrival to the guest house in New Damascus

We wanted to evacuate everybody the third day but it was impossible. A lot of critics from the

part of the Popular Committees, they were saying “you are helping the families of the

militiamen that are killing our families”.

But we kept negotiating and bypassed the critics. We appointed three days later another day to

finish the evacuation. This day begun with an impressive presence of International Red Cross

and Red Crescent ambulances, mobile clinics and volunteers and more than 30 buses. Alas the

warlords did not accept the evacuation. We could not open the gate and some undisciplined

condition. The army, despite the cease fire answered with bombing.

The media said that there were many killed and injured people. Nobody knows the reality

because the videos issued from Moaddamiya do not show injured people. We knew afterwards

killing her or paralyzing her. One Palestinian boy was killed…

We knew that this day the warlords did not want any more civilians to go out: they need them

In all cases this day we suffered a lot.

the cease fire and this was a provocation for the militiamen. In reality Mother Agnes-Mariam

friendship: how could she call us terrorists? Rumors circulated on the web that the Free Syrian

Army decided to slaughter Mother Agnes Mariam as a betrayer. Nobody could explain why

Then the battle of Moadamiya ignited.

We think about the women and children that are still there.

We think about the women and children that are still in Daraya.

All those people asked us to intervene and evacuate them.

But the warlords prefer not.

Nevertheless we are proud to have been able to put in a safe place 5000 civilians.

possible. Peace in Syria is possible

Impressive humanitarian armada for the evacuation of Moadamiya !

th of October we could, thanks to the Lord, finish the evacuation

of 2300 more women and children while 550 men, civilians and militiamen, decided to render

themselves to the Army. 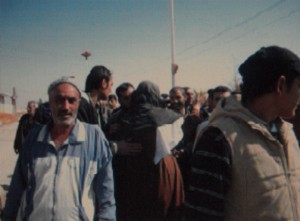 One of them spoiled the atmosphere: he presented a false ID and the soldiers discovered four

other false ID. This could favor a spirit of retaliation but the ISTEAMS could establish an

atmosphere of respect and friendship.

The 550 men were taken by our team to a rest house and were served with dignity. Then each

discussion and registration. They will spend one more night in the rest house and then the

majority will be able to go back to normal civilian life. Those who have perpetrated crimes

will be kept in this rest house for a rehabilitation period.

It is the FIRST time that we see such a thing in Syria.

These matters of facts are UNIQUE in the history of the Syrian conflict. No one entered at the

air force security services and went out in two hours unless to the grave! A transformation is

ongoing. Let us hope that mercy and forgiveness will prevail among all parties.

We hope that the media will transmit this story in a credible, positive way, helpful for all

parties and concerned by reconciliation and peace.

Head of the International Support Team for Musalaha (Reconciliation) in Syria