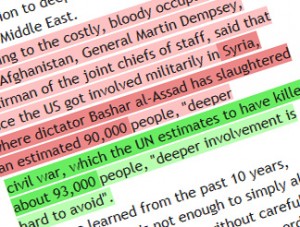 A recent  online article by Spencer Ackerman on the Guardian website was corrected, as noted in a footnote:

This article was updated on 22 July to correct a line that said Bashar al-Assad had “slaughtered” 90,000 people in the Syrian civil war. In fact the UN estimates the total death toll, regardless of responsibility, to be about 93,000 people.

A quick check of the excellent resource NewsSniffer, reveals that the actual original wording was:

No quotes around “slaughtered” there.  You can see the differences side-by-side on the NewsSniffer website.

Making the correction is all well and good, but thousands of readers will have seen the original and never returned to see the correction.

How does such a slip happen?  A journalist with even a basic knowledge of the Syrian conflict wouldn’t have come close to writing that line.  It reveals a level of default thinking that is programmed to present an anti-Syrian-government point of view, regardless of the facts.

The correction could have gone further and highlighted the breakdown in deaths.  As ever in war, this is only going to be an estimate, but the Wikipedia article on the subject currently shows estimates from the Syrian Observatory for Human Rights to include over 42,000 deaths of pro-government forces (regular army and others).

We are petitioning journalists everywhere to pledge to report responsibly and accountably on the Syrian conflict – please support us by signing our petition.